THE CONDITIONS OF LA ILAHA ILLA-LLAH 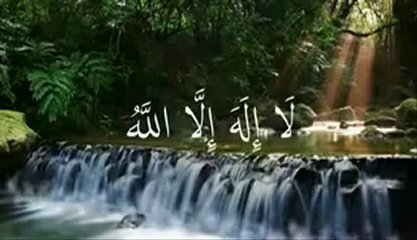 There is no question that the mere saying of, "I bear witness that there is none worthy of worship except Allah and I bear witness that Muhammad (peace and blessings be upon him) is His servant and messenger," is not sufficient for salvation. In fact, the hypocrites used to make this statement quite often yet Allah describes them as liars and says that they shall abide in the lowest abyss of the Hell-fire.

As many scholars state, though, this statement or testimony is the key to Paradise. The famous Follower Wahb ibn Munabbih was once asked, "Isn't the statement of La ilaha illa-llah the key to Paradise?" He answered, "Yes, but every key has ridges. If you come with the key that has the right ridges, the door will open for you. Yet if you do not have the right ridges the door will not open for you." That is, it is saying [while meeting] certain conditions. These conditions are what will differentiate the person who will benefit from his making of that statement from the one who will not benefit from that statement, no matter how many times a day he may have made that statements.

If we study the verses of the Quran and the Hadith of the Prophet (peace and blessings be upon him), we will find that the conditions of the shahadah are seven, eight or nine in number depending on how we look at them. It is important that all of us make sure that we are meeting these conditions in our own lives and in our own testimony of faith. We must do our best to satisfy these conditions before it is too late and our testimony will be no avail whatsoever. It is not simply for the sake of teaching these conditions. Indeed, there is no benefit to that. But it is, instead, for all of us to look to ourselves and to make sure that we are actually meeting these conditions so that, by Allah's mercy, the doors to Paradise will be open for us by our key of La ilaha illa-llah.

The first of these conditions is knowledge. That is, one must have the basic and general knowledge of what is meant by the shahadah. One must understand what the shahadah is affirming and what the shahadah is denying. Allah says in the Quran, "So know, [O Muhammad], that there is no deity except Allah and ask forgiveness for your sin"(Qur'an, Muhammad 19). Similarly, the Prophet (peace and blessings be upon him) said,"Whoever dies knowing that there is no one worthy of worship except Allah shall enter Paradise." (Recorded by Muslim.)

In fact, the shahadah itself is a testimony. When one testifies to something, one must know what it is that he is testifying concerning. Obviously, a testimony about something that one does not have any knowledge about is absolutely unacceptable. Allah says in the Quran, "And those they invoke besides Him do not possess [power of] intercession; but only those who testify to the truth [can benefit], and they know." (Qur'an, al-Zukhruf 86).

Now this condition probably sounds obvious. If someone said to you, "There is no God except Allah," and then said that what he meant by Allah was Jesus, you would immediately tell him that this shahadah is nonsense. Yet can you imagine that there is a Muslim country in the world that until recently used to have a yearly week-long celebration to "the gods of the Sea"! All along they call themselves Muslims and they make shahadah numerous times a day. This clearly shows that they have no idea what the meaning of their shahadah is. Do you think that this kind of shahadah will open the doors to Paradise for them?

Today, there are many Muslims who wonder why we should not accept secularism. They think that there is nothing wrong with secularism! Many of these Muslims pray five times a day and utter the shahadah repeatedly. Yet they see nothing wrong with accepting a Lawgiver other than Allah? What kind of shahadah are these people making?

All of us do our best to learn at least the basics of Islamic beliefs. The basics of what shahadah means. In this way, Allah willing, we will be making the correct shahadah. We will be witnessing to the truth as we are supposed to be witnesses to it.

The second condition of the shahadah is certainty (or al-yaqeen). This is the opposite of doubt and uncertainty. In Islam, in fact, any kind of doubt is equivalent to Kufr or disbelief. We must, in our hearts, be absolutely certain of the truth of the shahadah. Our hearts must not be wavering in any way when we testify to the truth of, "There is none worthy of worship except Allah."

Allah describes the believers in the Quran as those who have belief in Allah and then their hearts waver not. Allah says, "The (true) believers are those only who believe in Allah and His messenger and afterward doubt not, but strive with their wealth and their lives for the cause of Allah. Such are the sincere" (Qur'an, al-Hujurat 15). Similarly, the Messenger of Allah (peace be upon him) said, "No one meets Allah with the testimony that there is none worthy of worship but Allah and I am the Messenger of Allah, and he has no doubt about hat statement, except that he will enter Paradise."(Recorded by Muslim)

Indeed, Allah describes the hypocrites as those people whose hearts are wavering. For example, Allah says, "They alone seek leave of thee (not to participate in jihad) who believe not in Allah and the Last Day and whose hearts feel doubt, so in their doubt they waver" (Qur'an, al-Tauba 45).

Many scholars have stated that the diseases of the heart, or the doubt and suspicions that one allows into one's heart, are more dangerous for a person's faith than lusts and desires. This is because lusts and desires may be satisfied at some time yet the person still knows them to be wrong and he may control himself and repent and give up that evil deed. On the other hand, the doubts and suspicions may linger in the heart, with no cure, until the person finally leaves Islam entirely or continues to practice Islam while, in fact, in his heart he does not have the true faith.

The greatest cure for these doubts is seeking knowledge. It is through sound knowledge of the Quran and the sunnah that most of these doubts will be removed. By study and understanding, one will attain certainty. And as one studies and learns more, his certainty will be made firmer and firmer.

I will give you just one example on this point. This is related to all of the doubts, suspicions and misconceptions that are circulating about the authenticity of the hadith literature. For example, some Muslims even claim that hadith were not recorded until at least 200 years after the death of the Prophet (peace and blessings be upon him). Indeed, there are Muslims who seem to have a great deal of doubt about hadith and are very quick to reject hadith on that basis. But, in fact, if one actually takes the time to study the history and preservation of hadith, one will immediately recognize that all those claims and charges against the hadith are not based on anything scientific whatsoever. They are nothing but false claims that come from Satan and which Muslims with poor understanding and knowledge have allowed to creep into their hearts.

Let me make one last point about this condition of certainty. As I alluded to earlier, doubts and misconceptions are very dangerous for a person's faith. Doubt and wavering are tantamount to apostasy in Islam, as I mentioned earlier. Hence, every Muslim should do best to safeguard himself from such doubts and remain away from the sources of doubts- especially if they are not well grounded in the Islamic sciences and do not have the knowledge to refute such doubts and misconceptions. Hence if a person has an associate or friend, even if he be a Muslim friend, who is always making him doubt Allah or the religion, then he should remain away from that person in order to safeguard his own religion. Many Muslims nowadays study courses on Islam taught by Orient lists and because of their weak backgrounds in Islamic studies, they are influenced by the nonsense that some of these Orient lists are teaching in the name of "science".

Again, the greatest counterforce that can defeat doubts and misconceptions, after the bounty and guidance of Allah, is sound knowledge and understanding of the religion. When a person has that, he will not be affected by the weak arguments put out by the enemies of Islam and he will be, Allah willing, from among those described in the Quran, "It is only those who have knowledge among His slaves that fear Allah" (Qur'an, Fatir 28)

"TAJUDDIN IS A SEA OF BENEFICENCE"